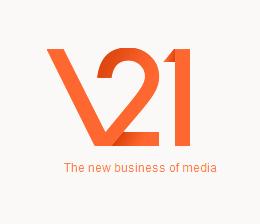 Am currently at the V21 conference, an initiatve of AIMIA being held today in Melbourne. After a brief welcome from organiser Debra Allanson the opening address was given by AIMIA national president and managing director of Portable,  Simon Goodrich, who talked about the evolution of AIMIA and of people’s awareness of digital media generally.

The first presentation was given by Geof Heydon, the vice president for the digital economy at Alcatel-Lucent in Australia (and also quoted in A Faster Future). He talked about how it is the digital content innovation that needs to occur to take initiatives like the National Broadband Network, because a lot of the technology of the networks themselves have already been developed. He also talked about the power of faster networks and compression, using the example of how our ability to download a movie that has come down from 800,000 hours to an expected 30 seconds by 2012. He also pointed to how less money is being spent on advertising as digital media allows the spend to be more targeted – we can stop s[ending the half of the advertising budget that is traditionally wasted.

He also talked about the future of applications will be all about hiding the complexity that lies behind them. For instance, the browser will become less important, and phone numbers will become irrelevant – we will just connect as people to other people. He also suggested that the operating systems that are on phones will become the operating systems that will run on televisions. He also talked about the possibility for new business models that are barely being thought of today (one of the main themes of A Faster Future) and the need for people to be thinking about these possibilities in the future. He also talked about how there will be no one big killer application – instead there will be a killer environment made up with many smaller important applications.

Finally, he talked about the architecture of the NBN and its importance in terms of underpinning the development of the digital economy. Industries must learn to deal with many business models, and the devices and applications will hide the complexity. He also stressed that these changes will creep across every sector (another theme that we explore in A Faster Future in great depth) – indeed, everywhere apart from the telecommunications technology sector.

“The technology is advancing quicker than the consumers can consume it from a network infrastructure point of view,” Heydon said. “Every major department and industry sector must find ways to innovate. And we have done a lousy job of teaching people what megabits per second means … and see the excitement on how it’s being used.”