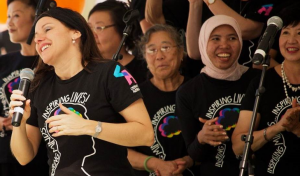 In the decade since I last had a full-time role I’ve often been asked what I do. It used to be an easy answer – freelance journalist. Over time however the list of services I find myself providing has blossomed – author, speaker, facilitator, host, communications trainer, analyst, writer, consultant, etc – to the point where I pretty much have no idea how to succinctly explain  what I do. It is on the whole probably a good problem to have.

But it is worth thinking about the question itself. ‘What do you do’ is a question that provides an easy way to define us, but it doesn’t really do many people justice now, especially when many of us are doing more than one thing. Describing what you do gives only the slightest inkling of what it is you can do – and in a world where increasingly I feel that we are making it up as we go along (I’ll explain what I mean by that in another post soon), skills and potential count for a lot.

Partly as a result of a project that I am working on now (and yes, that will be the subject of yet another blog post) I started to realise that there is a far more interesting question waiting to be answered – ‘why do you do what you do?’. I’ve tried it a few times and the answers have been surprising.

Firstly – the heart of my motivation. I have a strong belief that the Australian economy is poised for an unhealthy future. Too much focus on (based on previous success) in mining has left us lagging in other sectors – especially in information-based industries. We are vulnerable to encroachment from foreign competitors – both online and off – and too few of our traditional successful domestic companies have parlayed that success on to the international stage. Our boards lack courage and vision – and are too hampered by the need to return shareholder value in the short term to take the steps they need to if they are to ensure their long term future.

The answer? In short, I believe we need to make more ‘things’ (including intellectual property) that people in other parts of the world need (or at least are willing to buy), lest we fall behind emerging nations and find ourselves with a declining standard of living.

It is a sentiment that is echoed in numerous reports, including Accenture’s report For Richer, For Poorer, released last year, which found: if the government in Australia does not respond with urgency and decisiveness to address the fundamental challenges in its labour market, the country will see declining levels of productivity growth rates and overall shrinkage of the workforce. That, in turn, will result in a decline in the living standards in Australia.

More starkly,  earlier this year PwC released its World in 2050 report which suggested Australia would slip from 19th place in 2014 to 28th in 2050, behind Bangladesh and Iran. Go Team Australia …

There is no end of reports that suggest similar futures. There is also no surplus of ideas of how to turn our progress around.

So back to the question – why do I do what I do.

For starters, I am a passionate believer that for a country to succeed then it needs everyone – EVERYONE – working together to achieve growth (in whatever metric you consider important). Perhaps it is the bias that comes from more than two decades researching the impact of internet/digital technologies on Australian business and society, but my own conclusion is that a more digitally-capable Australian society is a key ingredient in our long term competitiveness. That means raising the digital skills of EVERYONE.

Hence I am working with groups such as the Broadband for the Bush Alliance, which seeks to improve access to and utilisation of digital services in remote and regional Australia (please join us in Darwin in July for the next annual Forum, for which I am an ambassador). I am also lending some effort to the Australian Smart Communities Association, which will be holding its inaugural convention in 2016, and aims to showcase the work to improve digital services in communities around Australia.

I’ve also spent much of the last few years speaking at events in locations ranging from Longreach to Mount Gambier, helping to raise digital awareness and skills. This work will continue to be a focus for me, and it is my hope that in future situations I might be able to do more than just raise awareness. Have a look at Infoxchange’s Go Digi program as an example of a program that I fully support and will be looking to promote further.

But it is not enough just to be smart users of technology – we have to be smart creators too. That means more start-ups. Start-ups do amazing things. They create new markets, and improve old ones. The show how inefficiencies can be stripped out. They incubate new processes and new ways of running businesses (cloud computing, agile development and dev ops, etc), the socialise new working models (flexible working, remote working), and so on. And occasionally they go on to become multi-billion dollar employers in their own right. These companies quickly outgrow their domestic market, and we need to be generating a lot more of them if we are to have a healthy future.

Many of these companies are founded purely off the cleverness of the people at their core (not off a mineral resource) and no country has exclusivity in smart people. Hence the more we can do to bring people into digital careers and support start-ups and entrepreneurs, the better. This will be the focus for another project in 2015 (and yes, another blog post).

I also am convinced that having smart users and smart creators in the same environment benefits both groups – one can learn from the other – and hence both are needed for long-term sustainable success.

This also leads me to believe that if Australia is to have a successful future in digital technologies than we can’t afford to leave half of our potential talent out of the game. Australia already suffers from too few high school students choosing careers as digital creators (hence my support of initiatives such as Digital Careers). The need to get more women into the IT industry is critical.

A lot this work is realised through writing and speaking, and the occasional direct engagement. Its what I refer to as ‘working from the edge inwards’ – and is based on what I saw in Africa a decade ago, where you can do a lot more for a village with $1000 and a few shovels – more seemingly than you can do with a million dollar aid budget. Making the digging of clean wells work at scale however is a difficult exercise.

I’ve also done the odd spot of work with larger organisations, helping to seed and stimulate ideas of what the future holds and how they might not just adapt to it, but anticipate and profit from it. I am constantly seeking an answer to the question of whether large organisations can innovate at the pace required to compete with digital upstarts or changing customer preferences – and if so, whether the formula can be distilled and administered  elsewhere. The jury is still out on that one, with the exception of a handful of examples.

But ultimately – why do I do what I do? Because I have two little girls whom I want to see grow up leading the best possible life that can be provided for them, with options in what they choose to ‘do’. If I can contribute to a better future and pull other people with similar goals together to work towards that future, then I know I will have done all that I can.

A lot of my thinking still needs fleshing out, but this is a start.

Fingers crossed, maybe writing it all down might help me realise some of this.